One of the things that we like to do as a family is play games. This can be a bit difficult when P wants to play a game and p wants to run across the room repeatedly yelling about how fast she is. It’s also somewhat difficult to decide which card to play or which move to make when being climbed on. 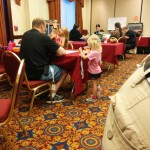 I won’t go into the history of the event that you can read for yourself at https://barkingmad.org/.

The way that we have approached this event has been different for the last few years, depending on the needs of the small ones. Last year, we arranged child care and went as “adults”. This year, we decided to take everyone because of P’s interest in a few new games. She has surprised me with skills and strategy in a few of the games that we play with her.

Although the “convention” starts on the Friday before Labor Day, and ends on Monday afternoon, we decided to opt for the short version – arrive on Saturday and leave on Sunday. We have been attending these events for longer than I care to admit publicly, so we know many of the attendees and staff; and those that we don’t know are usually familiar faces.

For a laid-back event, there are many things to do. The group takes over three or four of the large meeting rooms in the hotel, and sets up open tables. We took a few of our games with us, mostly the games for the small ones. If there’s a game you’d like to play, sit down at a table and start setting up the cards or pieces. Odds are, someone walking through will either express interest in learning the game (or playing an old favorite), or negotiate with you to play something they’d like. “So you want to play Battle Cattle? How about you play a quick round of Grave Robbers from Outer Space with us first, then we’ll all play Battle Cattle?”

There are organized events that are scheduled; the annual charity poker tournament, the kid’s roleplaying adventure, and more (that you can find from the same link above). I tend to just join in when I see a game I like being played, or try to convince people to play something I haven’t been able to in a while. Many times, a game will end and continue into a long conversation about anything between old and new friends.

One of the bigger scheduled events is the LARP (Live Action Role Playing). While this phrase may make one think of the stereotypical pictures of nerds in wizard gear in a field, that’s not quite accurate for this.

This year’s LARP was written and produced (yes – it’s a *ton* of work) by a dedicated group. I was able to join the crew of The Starship Edsel while Amber played with and watched the girls. My character was Dr. Mallard Decoy, and I tried to figure out what was going on in the various plots in the game while meeting my own goals by having conversations with the other players. The end result is that everyone had a good time, I got dressed down by the ship’s Executive Officer before being stunned by a “Klingon” and finished the game unconscious on the Bridge.

There were more kids in attendance than I remember seeing in past years. I am pretty sure that ours were the youngest, but that did not stop us from having a few good games of “Skip-Bo Jr.” and “The Don’t Let the Pigeon Drive the Bus Game” 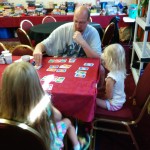 P got to join in a game of Telestrations and Tsuro with a group of older kids while p ran between us and ate snacks from the “convention suite” – a room where multiple fresh breads, snacks, and movies are available during the open hours of the event.

I could mention the Chaos Machine that has inspired P to try to build one out of stuff we have at the house, rather than to buy the Chaos Toy kit. I could mention the restaurants nearby (I liked Firehouse Subs). Or, I can suggest to anyone that finds this interesting to attend the event. There’s your sales pitch. I get nothing for it, except maybe some new people to play with or against.