I decided that since we delayed International day Japan for a couple weeks I would write up a post about our second ever International day, which we did on Father’s Day 2012. Because it was Father’s Day, Chuck got to pick which country, and of course he picked Poland. He grew up in Pittsburgh and so ate a lot of their food. I, on the other hand, grew up eating more Asian style food, meaning Chuck got to introduce me to a lot of the Polish foods over the years. I now love many of these very much, and they are very common meals in our house.

Because this was only our second International day, we were still forming what these days were and how to execute them. Because it was Father’s Day and we had family that wanted to see us, we decided to do the cooking and the coloring parts at my grandmother’s house, letting more of the family join in. We then listened to music and drove the streets on Google maps later when we got home.

Flag coloring came first and we also did some flowers from Poland. P had dressed up in her chief outfit, so that she could run the kitchen.

For the menu, we had apple cranberry kompat, cucumber salad, perogies, cheese babka, and of course curried chickpeas. Yeah – I know you all read that and went “…curried chickpeas?!?!?” My cousin made it up at home and brought it to share, and it was very good. 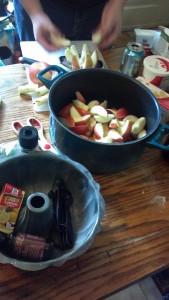 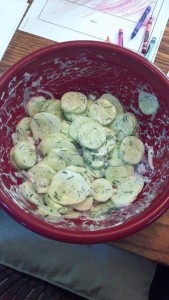 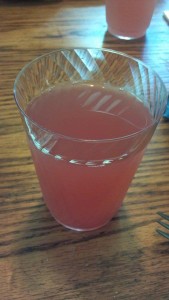 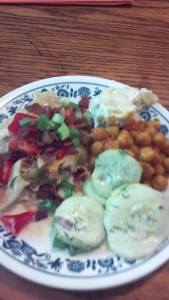 It was great working on all the food as a group. We had a ton of fun messing around. 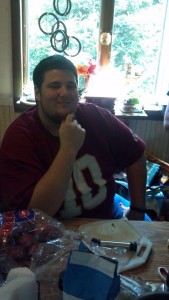 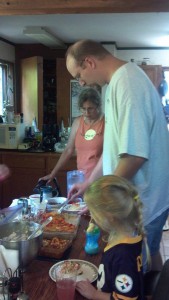 Everyone even pitched in to clean up afterwards.

and the kids slept the whole way home.

Once home, Chuck and P played with Google maps and talked about the different cars and buildings they saw in Poland.

All in all, it was a wonderful day, a ton of fun, and we learned a bit as well. It turned out much better than the first and insured that we would continue these days.

This site uses Akismet to reduce spam. Learn how your comment data is processed.