This day got a bit delayed due to p being sick, but was well worth the wait. We started off the day with P and I making a Japanese breakfast of Miso soup, sweet spinach, rice, and tamagoyaki. We got the recipes from Japanese cooking 101  and all of the food was wonderful.

Then the P’s spent some time teaching Shari how to make rubber band bracelets. Not really Japanese, but they had a ton of fun.

After lessons – back to Japan. We all colored flags and learned some cool facts about some of the things that make Japan unique. Some of the more interesting things were that they eat more fish then any other country in the world, that it is made up of 6,852 islands, and that they have a holiday called children’s day on May 5th which is for sons and one on March 3rd for girls.

We then all sat down for an amazing meal of Rice balls in a couple different flavors, Kabocha no Fukumeni and Roasted and marinated pork in a Yuan sauce. 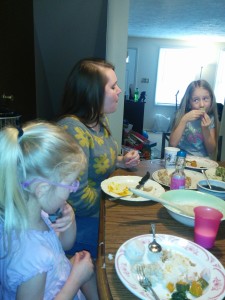 Chuck then took us riding though some streets in Tokyo using Google maps to see how the Japanese roads and cars look. We did side track for a bit looking at things they put in vending machines in Japan. It is amazing how many things they sell out of them. Besides sodas and candy, theirs have floral arrangements, french fries, clothes, toys, magazines,… and some things I did not show the kids.

Since many advances in robotics happen in Japan, we watched a couple videos about Asimo. P was very impressed and we both agreed that we would love to have one around the house. Asimo is near P’s height, so we talked about why that is a good size to be. Someone that size can reach almost anything, and has many places to hide.

We then enjoyed watching a few Japanese fairy tales on Amazon. We watched The Boy who Drew Cats and Peachboy. We found a series called The Little Travelers, and one of their episodes is from their time in Japan . I think this was a good touch and the kids seemed to really learn a lot from the show. I hope we can tie some more of their episodes into our future days.

We also decided that next month we will be doing Brazil. See you then.

This site uses Akismet to reduce spam. Learn how your comment data is processed.